In the household production model, does the increase in the price of pre-made food have positive or negative substitution effect on the consumption of home-made food ?

(a) What is the equilibrium wage of low-skill and high-skill workers before the migration ?

(b) What is the equilibrium wage of low-skill and high-skill workers after the migration ?

If labour is an inferior factor of production, will the increase in the rental rate of capital lead to

— positive or negative substitution effect on the employment ? 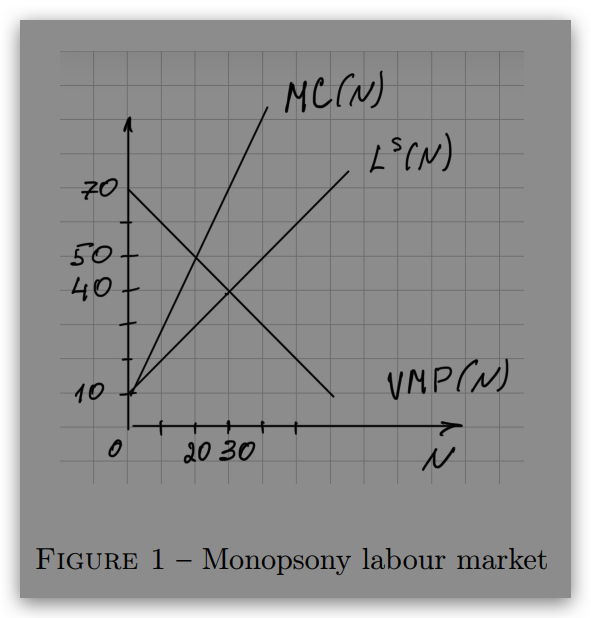 Problem 6 [5 points] Consider a monopsony with the value of the marginal product of labour and labour supply as described on the Figure 1. What is the level of underemployment of the monopsony relative to the competitive industry ?

Suppose that Alex has only two periods after high school. He can choose to work in both periods at the salary of CAD 15,000/period. Otherwise, he can go to college in the first period, pay tuition fee of CAD 6000 and a cost of textbook of CAD 500, and earn CAD 20,000 in the second period. Consider the first period as present, what is the internal rate of return ?

Does the degree of underemployment of a monopolist relative to a perfectly competitive firm decrease or increase as the demand for monopolist’s product becomes more elastic ?

Will the increase in the cost of migration increase or decrease the likelihood of migrating for the worker ?